I have gotten 2 big things from the SMNT monthly meetings.

The first is getting a pulse on the Los Angeles startup scene. By volunteering at many meetings, it gives me an overall sense of what is trending.

The second advantage is chatting with the audience before and after the talks. I have met numerous local entrepreneurs who are highly motivated and talented. Far better than scanning LinkedIn. The interpersonal bandwidth of the meetings is more valuable and fulfilling.

Hello,
Meetups are a great place to get out of the comfort zone, become a social mixer with well like minded people. My experience with SMNT starting out as an attendee on a personal quest for more information, I gained insight on how to build a pitching deck attending 5 demo and pitch events then showcasing my project my 6th time attending. The community aspect is well diverse and people come from all kinds of backgrounds, not just in programming in particular but from accounting,  law, and PR firms. I’ve gotten feedback and resources in all areas of my business attending social mixers such as my favorite Santa Monica New Tech. Thank you so much, Marina.
Deeds 🙂 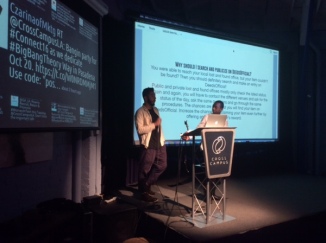 Sam McArdle shares his experience after taking Silicon Beach Startup 101 Course in Aug 2015 and launching his own company.

What stuck with me the most were the lunches. Marina cleverly brought in current entrepreneurs who were actively working at their startups. And they just sat and chatted with us. The conversational level of learning was something I never experienced before.

And it was during these sessions that I became truly inspired. I entered Marina’s Startup 101 Course with an inkling of an idea – and hearing these people speak about their experiences and what they’re building excited me. When you ask someone about something they are truly passionate about, look at their eyes – they light up. Zeal spills out from within. And I wanted that! It was the desire to find that intensity and excitement that set me on my course to building Elegy.

Watch the video about the Startup Course.

w Tech to AppNation VI in Las Vegas
January 5-6, 2015: www.appnationconference.com. It was perfect timing, as many members of our group were attending CES trade show one day later. And so we dro

ve to Vegas to see what is new in apps and to meet app developers and publishers. And it was worth it! AppNation VI occupied  The Cosmopolitan. Rocket scientist from Facebook opened the conference on Monday. The panels, hackathon and mixers were full of passionate people. Great speakers from Spotify, Yo!, Airbnb, Pandora, Kabam, Electronic Arts, Coca cola, Nike, and many more. Delicious food and drinks were offered to VIP attendees. 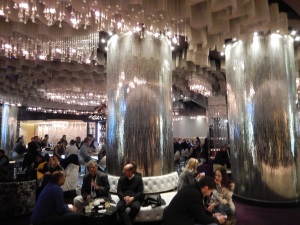 The party at the deluxe suite on the top floor with breathtaking views of Las Vegas was another hit! The Garage section with brand new app startups was the best part of the conference. The Garage was a showcase for app and mobile/emerging platform start-ups. Learn more: http://appnationconference.com/an6/files/2014/12/AN-VI-Garage-one-sheet.pdf.

We chose 4 apps and interviewed them so that you can get some idea of our excitement. See overview:

Watch all 4 interviews with our favorite startups: